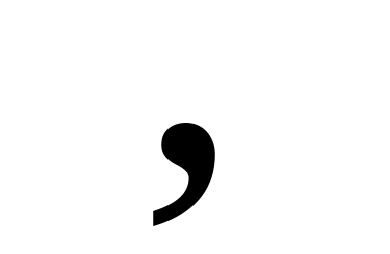 learn when NOT to use commas in your writing!
Published April 9, 2019 by Julia Lane

Unwanted commas, or how NOT to use them

Welcome back to the wonderful world of commas! Now that we’ve covered where to put them, let’s look at where they shouldn’t go. Here are six rules to help you avoid unwanted commas:

Don’t put a comma wherever you’d take a breath. Often, unwanted commas creep into writing because we would pause at that place when we speak. While pauses in writing sometimes coincide with a pause in speech, writing operates on its own sets of rules that don’t necessarily reflect speech patterns.

TIP: For more about comma splices and how to avoid them, take a look at this guide-sheet from University College (U of Toronto).

Don’t put a comma after a coordinating conjunction joining two independent clauses. (Recall the FANBOYS—for, and, nor, but, or, yet, so). The comma goes before the conjunction.

Note this . . . if you join two coordinated words or phrases with “and, or, but,” don’t add a comma.

4. No commas between basic sentence parts

Don’t put a comma between basic elements that make up a clause, such as subjects and predicates or verbs and objects.

5. No commas for essential information

Remember the rule about using commas around non-restrictive elements (appositives or relative clauses)? Here’s the opposite: if a phrase or clause is essential for the sentence to make sense or be meaningful, it is restrictive and is not set off with commas.

Think comma placement doesn't really matter? Incorrect use of commas could get you sued! You may want to read about the case of “The $2 Million Comma”: http://www.nationalpunctuationday.com/globe-and-mail.html (Because the contentious phrase was set off with two commas, it was considered non-essential. This is why Rogers lost out.)

6. No comma before “because”

Don’t put a comma before a “because”-clause or any other dependent clause that follows a main clause.

A comma correctly follows an dependent clause when it’s an introductory element.

Here are two more excellent reasons why it’s good to know when not to use commas:

To avoid confusing the heck out of your reader

Leonora walked on her head, a little higher than usual. (Lynn Truss--Eats, Shoots and Leaves, p. 98)

(Should read: Leonora walked on, her head a little higher than usual)

(This is an invitation to your Grandpa to come eat)

(This is an invitation to eat your Grandpa)

You can find a concise guideline for comma use at http://leo.stcloudstate.edu/punct/comma.html

This classic website is packed with self-study quizzes. Try this one for commas: http://grammar.ccc.commnet.edu/grammar/quizzes/comma_quiz.htm