learn to use commas in your writing
Published March 14, 2019 by Julia Lane

Myth: commas are hard to understand.

Myth: you have to memorize an enormous list of rules.

Myth: a comma is the same as taking a breath while speaking.

Myth: marriages founder, friendships die, and professional relationships splinter over differences about whether or not to use a thing called “the Oxford comma.”

So why are commas often sticking-points? More to the point, why does that matter?

Commas do more than set off words, phrases, or clauses within a complete sentence. Commas actually form part of the message. With simple elegance, the slight pauses created by commas influence how readers interpret your writing. By separating written sentence elements in systematic ways, commas help readers better understand your meaning.

Check out this example: 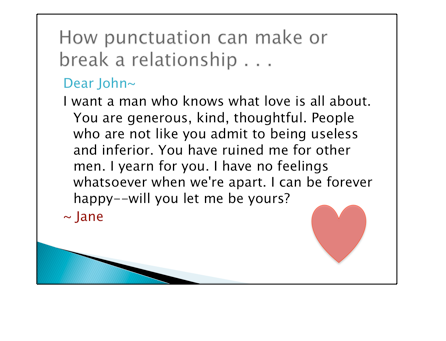 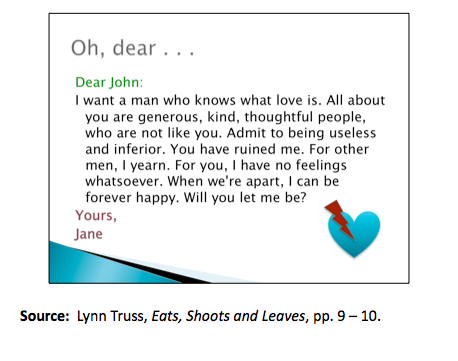 Traditionally, a “Dear John” letter means bad news for a boyfriend or fiancé. In Lynn Truss’s bestselling book Eats, Shoots and Leaves, the only difference between these two versions is the use of commas and full stops (and one dash). This is a perfect example of how commas can shape meaning!

TIP: It’s easier to use commas correctly if you can recognize a subject, a main verb, a phrase, and the beginning and end of a clause. But if you find any of that a challenge, don’t worry...come to the SLC for help!

Pattern 1: Before a coordinating conjunction when it joins two independent clauses. (Aren’t sure what those things are? See the blog post “Glossary of Grammar Terms.”)

Most of the superintendants gathered in the Great Hall, but the students snuck down to the dungeons.

Pattern 2: Before each coordinated word, phrase, or clause in a series or list.

Please be careful to pack the mushrooms, gooseberries, silverweed, and mint separately from the crushed manticore.

TIP: Remember that so-called “Oxford” (or serial) comma mentioned earlier? That’s the comma before the final “and” in a series. If your paper uses MLA, APA, or Chicago style, you must add that comma. That’s easy to remember!

Clause: When Esmeralda pushed the Evil One into an alternate universe, the entire realm celebrated.

Pattern 4: On each side of a modifying word, phrase, or clause that interrupts a sentence. Typical mid-sentence modifiers (“interruptors”) include

Professor Slitherfingers, however, decided not to attend the celebration.

Note: you can usually begin or end a sentence with a single-word adverb instead of using it as an interruptor. Your choice!

Cookie, my best friend's irritating ferret, has been banished to the dog house.

A powerful new troll-repelling spell, which for years remained locked in a secret vault, will soon be approved by the Chemistry Department.

TIP: You could choose to say “A powerful new troll-repelling spell will soon be approved by the Chemistry Department.” The clause “which for years remained locked in a secret vault” adds extra information (like an appositional phrase). Try mentally deleting the relative clause. If your sentence still makes sense, then the clause is non-restrictive, and you must set it off with commas.

A restrictive relative clause is essential to the meaning and structure of the sentence and does not take commas.

Get to know these four basic patterns, and you’ll (almost) always get commas right.

Coming soon to Grammar Camp...when NOT to use commas. Stay tuned!

Previous post: Congrats to the winners of the 2018 SLC Writing Contest! Next post: The Excellent Mistakes Toolkit