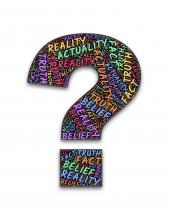 Sifting the grammar facts from the grammar myths
Published October 16, 2018 by Julia Lane

If you want to challenge yourself, do the Myths or Rules Quiz before reading on…

A little bit of context

According to Williams & Nadel (Style: 10 Lessons in Clarity and Grace), the only “rules” it is absolutely necessary to follow are those generating fundamental grammatical structures and those reliably distinguishing standard from non-standard speech. For example, it’s a rule to signal the past tense with an –ED ending for regular verbs, or to precede a singular, countable noun with a, an, or the.  It’s also a rule not to use a double negative, such as “I can’t get no satisfaction” (okay for song lyrics but not for standard speech).

A rule is not a rule when most otherwise fluent, careful readers and writers ignore it (Style, p. 20) or when only prescriptivists or language snobs take it seriously. Here are some examples:

Truth: "And" or "but" are informal in style, but plenty of sentences begin with these coordinating conjunctions (as well as with "so"). "Because" is a standard subordinating conjunction signaling the reason for something; a clause with "because" can be placed at the beginning or the end of a sentence.

Myth: Do not use “I” in academic essays.

This depends on your topic, your purpose for writing, and sometimes the discipline you're in. The first person is essential if the writer is expected to include personal observations/experiences in an essay or report. But to avoid the appearance of bias, "I" should not be overused or used unnecessarily. As well, in some disciplines, the first person is not appropriate. If in doubt, ask your professor!

Myth: Use only “that,” not “which,” in restrictive clauses.

A restrictive clause acts as a limiter whose meaning is restricted to one particular noun in your sentence.  So in -- "The house that was demolished last week once belonged to my grandmother." -- the relative pronoun that provides specific, limiting information about the noun "house." In effect, you're saying ONLY that house. The relative pronoun "which" can do the same thing.

Note: "which" can also begin a non-restrictive clause, which adds extra information to the noun (as I've just done here!). In that case, "which" must be preceded by a comma.

Myth: Use “will” for the second- and third-person simple future, and “shall” for the first-person.

Can you believe editors still have debates about this? At one time, most people drew a distinction between "will" and "shall." Today, that distinction is preserved mainly in legal documents (where shall means “must, has a duty to”).  For almost all other writing purposes, will or the informal "going to" are perfectly fine to signal future intentions.

Read Part 2 of Myths & truths on In Common next week!