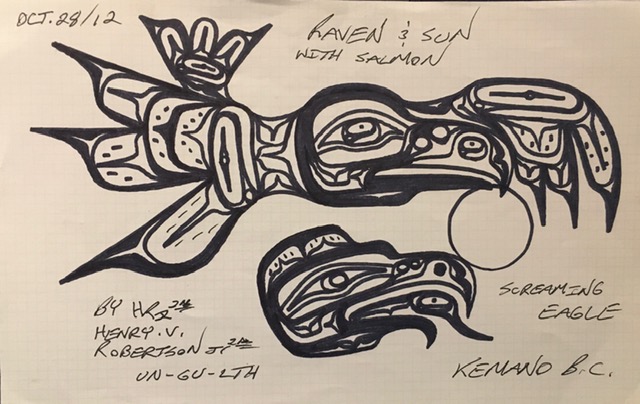 thank you to Henry V. Robertson Jr. from Alert Bay, from the Nuxalk Nation in Bella Coola whose art is featured here
Published June 15, 2020 by Julia Lane

The first thing you do is to forget that I'm black.

Second, you must never forget that I’m black.

The first thing you do is to forget that I'm [Indigenous].

Second, you must never forget that I'm [Indigenous].

The first thing you do is to forget that I’m [homeless].

Second, you must never forget that I’m [homeless]

Adapted from black feminist Pat Parker's 1978 poem, "For the White Person Who Wants to be my Friend.”

I am out for a walk in neighbourhood of the city that borders the poorest postal code in Canada.

It’s noonish. The streets are filled with office workers out for lunch. The air is corporate. As I approach the crosswalk, out of the comer of my eye I see the man trying to sell something.

In the past, I would have ignored you, not even seen you. But for some reason, I look back. I see you more clearly. I see you. And I sense the privilege and power embodied in me.

He is white, middle-aged, bearded, his hair long, unkempt, his jeans, worn. He is wearing an ID tag around his neck. I ask him what he’s selling. He shows me a calendar: "Hope in Shadows: Portraits of our Community". On the front cover is a lone native boy standing with his back to a brick wall, painted in green, and a colorful mural of flowers. He holds up a sign: "i can Make a Difference". As I examine the fine print on the back, I read 'This calendar is sold on the streets of Vancouver by homeless and low-income people. Vendors buy the calendar for $10 and sell it for $20. All money from the transaction goes to the vendor." I feel compelled to buy one. I take out a crisp, $20.00 bill and hand it to the man. He smiles, thanks me, and I walk away with my calendar. Have I made a difference?

As I make my way down the street, and a few blocks away I see another man who appears to be homeless. He isn't selling anything, but sits curled up against a lamp post, shivering. It’s raining now, ever so lightly. He hangs his head and stares blankly at the sidewalk. He is holding a discarded Starbucks venti-sized disposable coffee cup in one hand, and a sign in the other that reads, "Hungry, Clean and Sober".

In the past, I would have ignored you, not even seen you. But for some reason, I look back. I see you more clearly. I see you. I sense the privilege and power embodied in me.

As I stand waiting for the light to change, a young white male construction worker stops in front of him, holds out his empty helmet, mocking him, and walks away laughing. The man on the street says nothing, raises his head slightly, and gazes back at the grey, damp concrete.

I make my way to Subway across the street and order a Subway club and a Milk 2 Go. Returning to the comer, I approach him from behind and say, "Are you hungry?" He spins around. He tells me he is and how much he loves milk. I give him the sandwich and the milk, which he accepts eagerly. He thanks me repeatedly. Have I made a difference?

I continue walking. As I approach the steps to the Art Gallery, a gathering place for activists, vendors, and chess players, an Indigenous man with long, dark hair, thick beard, and piercing eyes catches my attention. He is selling First Nations Art work.

In the past, I would have ignored you, not even seen you. But for some reason, I look back. I see you more clearly. I see you. Or do I? I sense the privilege and power embodied in me. White. Anglophone. Straight. Christian. Male.

I am confronted by the fact that "the historical me" was as largely responsible for the inflicting atrocities upon you and your people.

As I slowly approach the art work—postcard-sized drawings of colorful eagles and ravens and whales and other First Nations artifacts, each piece propped up against the concrete steps—you begin your sales pitch. But I have already decided that I will buy some.

I want to befriend you. I want to hear your story. But can I really hear you? From my position of power and privilege, who will benefit from you telling your story to me?

I decide on “Raven & Sun with Salmon” and “Screaming Eagle.” He has drawn these black and white images in black ink on a small piece of white paper. He has written his name, the date, and Kemano, B.C., in the corners. I then ask him whether he has status as a First Nations person. He replies that he is working on it. Then, he starts to tell me stories.

I want to say something. I want to apologize for being White. But how can I? I speak a language you don’t even identify with. I speak the language of your oppressor. The fact is, I will never be able to understand what you suffered at the hands of your white oppressors.

But, today I listened. And stood with you for a few minutes in the pain.

Note, it is unclear at this time if Robertson is the man who Tim met, or if the man who sold Tim the art copied his piece from Robertson's original work.

(You can read more of Dr. Mossman's writing confronting his power and privilege in academia in the published article Unravelling Power and Privilege in the Academy: A Personal Account)

---
As statements of solidarity with Black Lives Matter and commitments to engage in anti-racist work proliferate, the SLC shares this writing to reinforce that dismantling white supremacy culture is work for white people to do. This is personal, challenge, and everyday work and it requires us to dig deeply into our own lives and privilege and courageously look at, see, and change ourselves -- our habits and patterns.

While we want to challenge white scholars and students to take on this work, we also want to avoid the pitfall of centering white voices in this conversation. The following resources are written and created by Black writers, Indigenous writers, and writers of colour:

Anti-racism resources for all ages compiled by Dr. Nicole A. Cooke at the University of South Carolina

On this website, you can watch a 54 minute discussion between Ibram X. Kendi and Jemele Hill on "How to be an Anti-Racist". Ibram X. Kendi has written a book by the same title, and a children's book (yet to be released) titled "Anti-Racist Baby."

Resources for white people seeking to move from actor to ally to accomplice (this is a great place to go if you find yourself asking "but what can I do?")

Strategem Blog by Cicely Blain consulting (and check out the exciting upcoming virtual conference and digital resource hub on equity, diversity, and justice)

Layla F. Saad's book White Supremacy & Me is a resource to support you to write your way into reflection on your own white privilege and actions you can take to dismantle it

Those of us who carry privilege in our society have learning to do. This is by no means a comprehensive list of resources. It is just several options that have been part of our own learning that we are sharing with you as starting points.

Keep going. This work is hard and we need to do it.