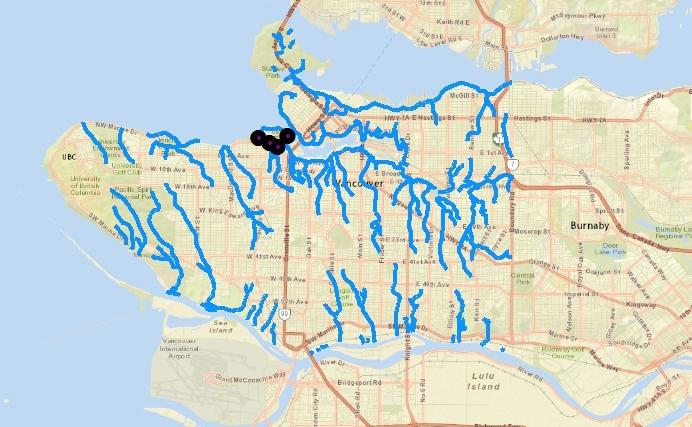 In the first half of the workshop, Jones and Dowson prompted participants to consider what kind of humanities data may be represented visually and geographically, looking at a diverse selection of historical and digital maps, such as the Authorial London Map (Stanford University) and the Gwich’in Place Names Atlas. Geographic Information Systems or GIS allow for the simultaneous representation of temporal and spatial information, allowing comparison between different data sets relationally or across time.

As an example, participants identified geospatial points in a Wes Hartley poem, in which August Jack Khahtsahlano orally plots the locations of salmon streams in Kitsilano. The points were positioned on a map using ArcGIS, a mapping and visualization software. Using an open source map from ABACUS, participants compared historical streams and waterways against a present-day map charting urban development, revealing how many of these traditional waterways have been displaced.

The workshop concluded with a brief introduction to StoryMaps, a free, online software suite that allows users to narrate spatial data sequentially using a number of different templates.