Open But Not Free: Invisible Labour in Open Scholarship Panel 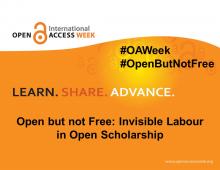 Bringing labour into the open

The belief behind Open Scholarship is one that many Digital Humanists are happy to get behind: knowledge should be openly and freely available. In an ideal open access world, researchers and educators would share their knowledge and resources with anyone who had access to the internet. In the often less-than-ideal world, however, for-profit journals and online harassment can prevent the free production and distribution of knowledge. As open scholars struggle to balance the real with the ideal, they face another, often overlooked challenge of open access that is explicitly discussed only rarely: labour.

Academic faculty with permanent positions are usually expected to publish their research findings and bring them into the classroom as an essential part of their jobs. But new models of open scholarship present new challenges. And what about those scholars and teachers who are not in academic positions? What about graduate students, or other precarious members of the knowledge-production cycle?

Open But Not Free: Invisible Labour in Open Scholarship

The gathering at SFU Harbour Centre was illuminated by a quotation by Audrey Watters: “When we think about ‘open’ and labor, who do we imagine doing the work? What is the work we imagine being done? Who pays? Who benefits? (And how?).“

The panel included Carol Munoz Nieves, a Research Assistant at SFU; Juliet O’Brien, a Lecturer at UBC; Sanjaya Mishra, an Education Specialist at the Commonwealth of Learning; and Melissa Ashman, an Instructor at KPU. Bronwen Sprout, Head of Digital Collections at UBC Library, moderated the panel.

To begin the evening, each panelist offered their own perspective on invisible labour in open scholarship.

As a research assistant for a project on open scholarship in tenure and promotion, Carol Muñoz Nieves talked about the necessity for compensated, stable labour for students. Nieves pointed out that even when paid, student research labour is often based in short-term contracts without benefits, reminding us that labour that is unpaid or precarious is labour not everyone can afford to do.

Sanjaya Mishra, whose organization creates open resources to teach educators and scholars about open access, called for a more complex and nuanced conversation around open scholarship and copyright. Mishra insisted that we should imagine open access as the new publishing standard, and proceed from there to address questions around copyright and the predatory commercialization of open scholarship.

As an instructor in Business Communications, Melissa Ashman noted that not only might the labour in creating open resources be invisible to others, it was also in some ways invisible to herself, as she didn’t realize how much labour it took to develop OERs while teaching at the same time.

The evening’s discussion prompted insightful questions from the audience. Discussion included the current reward systems in academia around open scholarship, including the frustrating truth that contract faculty often cannot access grants and are likely to be overworked. The panel also acknowledged the crucial work of libraries and librarians in assuring the sustainability of resources and in hosting repositories for open access work. They also addressed the question of the intellectual property being developed by student labour for faculty research projects. In response to the role of institutions, the panel suggested that the creation of an institutional mandate towards open access was key, and helped along by departmental collaboration. Moreover, they affirmed the importance of articulating the value of open access to undergrad students, who should be valued, as O’Brien put it, not just as potential academics but as “future world citizens.”

The future of open

If Watters’ questions about invisible labour framed the event’s discussion, a comment from Nieves perhaps sums up its ensuing spirit: Nieves called for a challenge to a traditional academic ethos that suggests that if we believe in open scholarship enough, we’ll do the work for free – an ethos that excludes everyone for whom free labour is unsustainable. She called instead for an ethos of labour that allows it to be diverse, inclusive, and equitable.