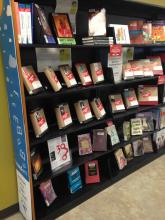 In honour of Freedom to Read Week (February 26 - March 4, 2016), an annual event established by the Book and Periodical Council that “encourages Canadians to think about and reaffirm their commitment to intellectual freedom,”1 the Digital Humanities Innovation Lab (DHIL) has put together a series of visualisations showcasing a selection of challenged books in Canada as well as banned and censored authors all over the world.. The project serves to highlight the pervasiveness of censorship among some of the most beloved and important works of literature and places them in the context of the times and places in which they were banned or censored.