Suspense: Towards a Digital Narratology 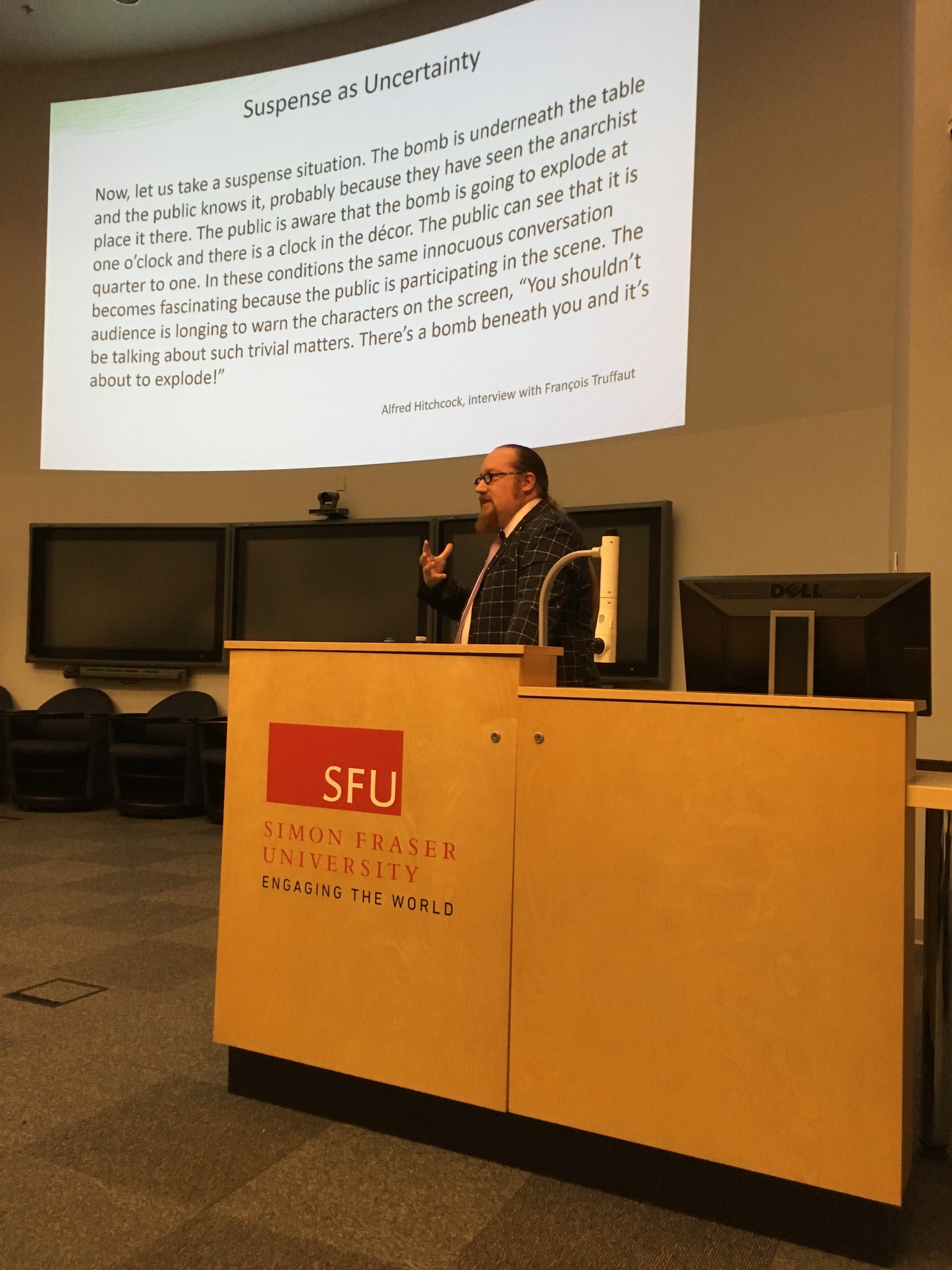 In partnership with KEY, SFU’s Big Data Initiative, the Digital Humanities Innovation Lab was pleased to welcome Dr. Mark Algee-Hewitt on September 22, 2017. Mark is an Assistant Professor of Digital Humanities and English at Stanford University, and the Director of the Stanford Literary Lab. He spoke about his current project with the lab, which uses data analysis from works of fiction in the nineteenth and twentieth centuries to discover literary techniques that create the feeling of suspense.

Mark pointed out that suspense – the anticipatory, edge-of-your-seat feeling one might get while reading – has been a tricky concept for literary theorists. Is suspense a literary genre, an effect, or a feeling? Is it about the reader’s response, and if so, does that mean that some readers might feel suspense at certain narrative moments while others do not? Common sense said that suspense was about uncertainty, about not knowing what would happen next, but Mark had a feeling that suspense was produced by literary techniques that would affect readers regardless of background. He and the lab set out to explore whether digital methods of text analysis could help reveal those techniques.

They realized that the digital methods usually used on literary texts, like text mining and quantitative analysis, would not be optimal for analyzing narrative because they break a linear story into a “bag of words” without regard to sequence. He was also uncertain how digital methods could be used to deal with the affective aspect of suspense. Mark decided to treat each text as a collection of events rather than a collection of words. In order to do this, he “bundled” the words in texts in groups of 2% (of the total text), and overlapped these groups by 1%. He used this data for topic modelling to find the topicality of suspense. The next step involved reader response; a group of students working with Mark read short stories from the nineteenth and twentieth centuries and rated how suspenseful they found each passage by noting how much they wanted to know what happened next. Through this process, Mark discovered that suspense had a syntax; the presence of adjectives, past tense verbs, and short, choppy diction were playing a role in how the readers responded to the text.

Mark then set out to discover if he could create a program that could accurately predict whether a text would create the feeling of suspense. His team trained a neural network by inputting topic model fields and distinctive word fields (among others), along with a group of student responses about suspenseful or unsuspenseful passages. The network combined those variables to predict whether a reader would find a passage suspenseful or not. Using his withheld student results in comparison, Mark found that the neural network could accurately predict whether a reader would feel suspense 85% of the time.

From this analysis, Mark came to three conclusions. The first came from the fact that the neural network was trained with contemporary fiction, and so it found historical fiction to be less suspenseful. Mark concluded that similar results would obtain with contemporary readers. The second conclusion was that suspense had to do with the conjuring of simulated spaces; the neural network consistently identified suspenseful passages that included spatial language. His final conclusion was that suspense can be episodic rather than narrative. This is owing to the insight that syntactic techniques, and not exclusively narrative, create suspense.

Mark’s talk prompted a lively discussion from the audience, who were interested in knowing more about how the neural network was trained, how Mark and his team made decisions while working with multiple methodologies, what genres of literature he had explored with the network, and how much his own definition of suspense came into play with digital analysis.

You can connect with Mark via email at malgeehe@stanford.edu, or on Twitter at @Mark_A_H. The Stanford Literary Lab is on Twitter at @literarylab. You can learn more about KEY, SFU’s Big Data Initiative, here.