In praise of the news (and of reading it!)

Imagine for a second that our world was remarkably static.

No new products or services would ever be created, largely because no new consumer demands ever arose. Demographics & desires... demand & supply -- all unchanging.  Companies wouldn't be competing with each other through new ways of advertising, innovative distribution systems, and improved production methods, so they'd all have settled into whatever slice of market share they'd captured back in the days when things were more dynamic.

In such a world, incumbent companies in any given industry would, I suspect, be very hard to push aside. New companies and new solutions would be rare, if not nonexistent.

Of course, that's not at all the world we live in.

Consumer needs change constantly, both in reaction to the churn of fads and because the consumers themselves are changing: culture shifts, demographic & ethnic re-mixes, and the pressure of ideas from others mean any image of a "typical" and unchanging consumer is a mirage that only approximates reality when we aggregate thousands of people into broad stereotypes. 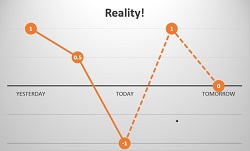 Similarly, companies and regulatory/economic environments are pretty much always in flux.

And yet, our hypothetical static world is the one that many strategy & marketing researchers are focusing on when they look for information. All too often I chat with students whose only focus is on the past: What do we already know about industry X, market Y, and consumer-type Z?  That's all good stuff to know of course -- the past gives us some idea of how things came to be the way they are and forms the foundation for where they might be going -- but it certainly doesn't predict the future.

The key question to ask is often "What's changing today that might affect industry X, market Y, and consumer-type Z, and can I draw inferences about the effects of those changes before others do?"

Which is one of the reasons I find the study results released yesterday by Statistics Canada to be so concerning.  In "The use of media to follow news and current affairs, 2003 to 2013" we learn that the "the proportion of Canadians who said they rarely or never followed the news and current affairs almost doubled to 13% in 2013, compared with 7% in 2003," a trend that is most pronounced amongst those who are 15-34.  As much as 21% of the younger cohort has essentially tuned out of any news that they don't discover through their friends via social media.

(Yes, younger folks are certainly more likely to get news online than their parents and grandparents, but the numbers above include such Internet news sources.)

Many of our fellow citizens  -- and, I would assume, many of our entrepreneurs and policymakers -- really are missing out on hearing about new trends, new technologies, new regulations, new anything that could point to gaps in the armor of incumbent organizations, services & products that could help new entrants see new ways to create and deliver improvements.

Frankly, this post doesn't even really need any library resources. Many news sources in all formats are completely free (from the Metro paper thrust into your hand in Skytrain stations, to radio stations, to sites like Google News).  However, I can't resist listing a few of my favourite tools and sources for keeping on top of general and business news:

1. PressReader
Page-image format for recent issues of hundreds of papers from around the world.

2. Canadian Newsstream
Easy access to the content from most of Canada's major newspapers (including the G&M and the Vancouver Sun), as well as many small-market papers (e.g., Burnaby Now).  Some titles have embargoes on the last 1-3 days of content, but at least they don't have paywalls for SFU researchers! Includes an ability to quickly set up search alerts, so that you are always on top of key trends in your area.

4. Nexis Uni
Similar to Factiva, including some overlapping publications, but with thousands of its own, unique titles.

It's difficult to recommend specific sources for news as our needs can vary so much, but in case they help, here are just a few of the sources that I scan regularly:

a. BBC News (I like their Business and Magazine sections in particular)

b. CBC News (get the impression that I like broadcaster sites?)
* Note: I'm also a fan of such CBC shows as The 180 and The Current.

c. The Economist
* Not exactly breaking news given the weekly frequency, but I eagerly await each new issue. Note that in addition to having online access, all SFU Library branches also have recent print copies of The Economist.

d. Harvard Business Review
* Even less up-to-date than The Economist due to its monthly format, but a quick scan of each HBR issue still helps me understand shifting trends at a deeper level than your typical blog post or news story can cover. Again, all of our branches have print copies. Stop by, slow down, and grab a comfy chair...

These are, of course, just a tiny sample of the sources I scan and the tools I use, let alone of the thousands available. Let me know if you'd like to chat further about such things, especially if you'd like to know how to set up alerts so that new (and relevant) information flows straight to you.

What do you read regularly to keep on top of changing events?

P.S. (17 Feb): I was rushing when I ended this post and should have included some of my favourite local news sources: Vancouver Sun, Business in Vancouver, and BC Business.  (As with the HBR and The Economist, all three of these publications are also available in print in each of our three branches. See these links for location details: Vancouver Sun, BiV, BC Business.) And I should probably list a couple of my favourite alert sources as well: BCG Perspectives and Statistics Canada's Daily.

Also: for more context on the changing perception of news in our world, check out Vividata's Trust in News report based on a recent survey in Canada.

Previous post: A companion for your journey into a new research area... Next post: Introducing WRDS Classroom!