Use this guide for help finding crime and justice statistics statistics and data.

Before you begin your search, it is helpful to think about whether you might be looking for crime and justice statistics or data.

Statistics are processed data, or data that has been analyzed in some way. They are generally used to support an argument or position in a study or report. Most researchers, particularly for undergraduate coursework, are looking for statistics.

Data is the raw form of the facts and figures behind the statistics, available in the format of numeric files. Data will be most useful to you if you need to run your own analysis, or create your own table.

For some surveys, such as the Uniform Crime Reporting Survey, you will have the option of either viewing the statistics or the data, depending on which database you use.

A second thing to consider when beginning your search is who or what agency might be responsible for creating the statistics in the first place: a private company, a governmental agency, a non-profit organization, etc. The chart below provides a conceptual framework for brainstorming who might have created the statistics you are looking for. It also highlights some key generators of statistics. 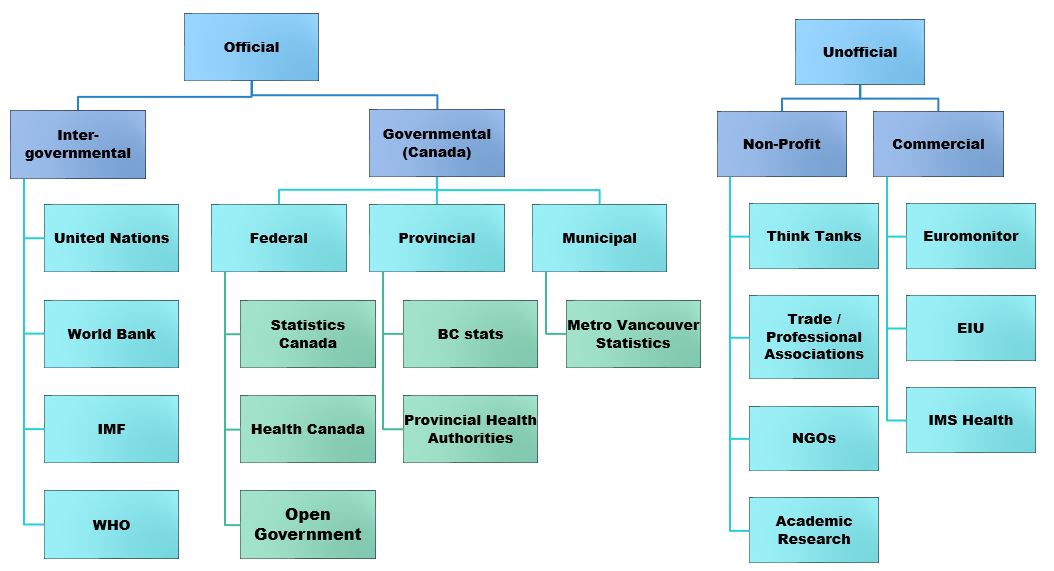 The Lower Mainland is policed by a collection of police departments and RCMP detachments. All collect and report out on statistics to produce police-reported crime data. Individual websites are a good place to check for district statistics. Additionally, local crime data is often reported out to larger organizations such as Statistics Canada. Accordingly, you can sometimes browse local statistics through larger provincial, national, and other sources as well.

There are 13 RCMP detachments in the Lower Mainland. Check the website of the associated RCMP detachment for statistical information and snapshots of each region, for example, the Burnaby RCMP Detachment.

The BC Government's Ministry of Justice is a major provider of BC's crime and justice data and statistics. The Ministry's statistics can actually be searched through various different websites. (Please note that for older statistics, you will often have to refer to print sources in the library.)

Crime Statistics in British Columbia
These statistical reports by the Ministry of Justice, Police Services Division, provide annual highlights of crime statistics in BC from 2007-forward.

Justice BC
Statistics from the Government of British Columbia's Ministry of Justice. Highlights:

Data BC
Here you'll find much of the same information from Justice BC, but in data, rather than statistical, format. Data BC's data is usually available in downloadable Excel or csv file formats, making it suitable for manipulation by coders and analysis by academics.

Ministry of Justice: Statistics Reports Into BC Fatalities
Various statistical reports on BC Fatalities, some organized by categories of death.

The Chief Coroner's Office may be able to respond to inquiries about individual incidents, or provide multiple incident data upon request, provided you can demonstrate a reason for obtaining the data. Did you know that GIS co-ordinates are recorded for all remains found?

The annual Uniform Crime Reporting Survey, known as the UCR and the UCR2, is the foremost source of police-reported Canadian Crime Statistics, and is produced by the Government of Canada . All Canadian policing units must regularly report data to this central aggregator. Standardized UCR definitions of crimes allow for trend analysis across different geographic areas.

UCR: The original UCR survey (aka UCR1), in existence from 1962-present. Only the UCR1 is a census. That is, it aspires to capture 100% of the  police data from all Canadian departments and divisions.

UCR2: Introduced in the mid-eighties, this survey provides more detailed, incident-based data. Not all policing agencies contribute yet to the UCR2. The UCR2 provides more in-depth information to complement the main UCR.

An in-depth documentation manual on the UCR survey is available via SFU Library's Abacus Dataverse Network. To access:

Some notable "fine print" about the UCR:

There are multiple websites and sources that provide access to UCR data.

The CHASS interface offers additional functionality plus access to historical versions of CANSIM not available on the above-noted Statistics Canada website. One way to access the UCR on CHASS:

Stats Can UCR data (1977-) can be accessed via the library's Abacus Dataverse Network database.

The print and pdf versions contain easy-to browse tabular data of crime statistics in Canada, derived from the UCR and UCR2.  Print is a helpful source of older UCR data.

A number of government publications explore crime and justice topics in-depth. These publications are based on government-collected data, such as the UCR. They provide helpful summaries and analyses of crime data, often combining data from multiple sources. Use these publications to locate relevant statistics and for secondary analysis on crime-related topics.

Crime and Justice Publications of Statistics Canada Many Juristat publications are cross-listed here (see below).

Juristat (1981 to present): Frequently published reports (400+) on a wide range of issues relating to the Canadian justice system and public safety. Juristat curates and comments upon data from a number of different Statistics Canada Surveys. Sample 2019 reports include: Family violence in Canada: A statistical profile, Adult and youth correctional statistics in Canada, Prior contact with the criminal justice system among people who fatally overdosed on illicit drugs in Surrey and in British Columbia - 2011 to 2016.

Other sources for finding Canadian crime and justice statistics

The Canadian Electronic Library Collection is a collection of research and policy papers from across Canada - an excellent source for cited and primary crime statistics.

Correctional Services Canada produces a number of research publications, and maintains a research spotlight each year.

The crime severity index assigns a weighted value to each crime type in order to facilitate cross-jurisdictional and cross-temporal comparisons of differences in severity of crimes. The weighting scale the CSI uses is based on sentencing data from Canada's courts - both incarceration rates and time sentenced.

The Crime Survey, also known as the Canadian Urban Victimization Survey, is a one-time survey capturing crime data from 1981.

The main Canadian UCR survey documents a measure of crime that is police-reported. In contrast, the General Social Survey (GSS) on Victimization attempts to measure crime from citizen-reported data. The Victimization survey one version of the General Social Survey, and is conducted periodically every few years. According to Statistics Canada, "this survey collects information from a representative sample of Canadians regarding their victimization experiences for eight types of crime: sexual assault, robbery, assault, break and enter, theft of motor vehicles or parts, theft of household property, vandalism and theft of personal property."

The FRDR repository stores and makes accessible research datasets from researchers affiliated with Canadian institutions. Of note, there is an SFU-specific dataset collection in FRDR, as well as open data from some government institutions.

The annual Homicide Survey (1961-). The "Homicide Survey collects police-reported data on the characteristics of all homicide incidents, victims and accused persons in Canada". Also available via Abacus.

Statistics for Canada's National DNA Data Bank and annual reports on the Data Bank, which provide some useful analysis of the statistics.

Searching secondary sources is an excellent way to identify sources of statistics and data for Canada. Notable sources:

There are a myriad of sources for international crime statistics. Accordingly, often the best place to start is by searching secondary literature on your topic. Secondary literature can include books, journal articles, newspapers and magazines, dissertations and theses, and research/policy papers.

Search secondary literature and make note of where authors are obtaining their statistical information from. Citations can also help you identify key statistical producers of the county in question. Once you find a citation to a statistical source or producer, use that information to track it down at SFU Library or freely online.

You can AskALibrarian for help tracking down a statistical or data source.

Dissertations and Theses Abstracts and Index
Full text access to PhD and Masters' theses in all subject areas, from across the world.

Newspapers and Magazines
Search newspaper and magazine collections for cited statistics. There will usually be less detail available in the citation (e.g., author and year) in non-academic sources.

Bureau of Justice Statistics
A key publisher of US crime statistics from all levels of government.

Federal Bureau of Investigation
Crime reports, publications, and statistics, including the United States' own Uniform Crime Reporting Survey. Note that some US UCR data may not be available to non-US citizens.

Inter-University Consortium for Political and Social Research (ICPSR)
Crime data sets are available for download from this central data repository.

Access statistics via a number of reports classified under various topics.

If you need help, please contact Yolanda Koscielski, Liaison Librarian for Criminology, Psychology & Philosophy at 778.782.3315 or ysk6@sfu.ca or Ask a librarian.