You can request assistance from Moninder Lalli, Liaison Librarian for GSWS by phone 778.782.4264 or moninder_lalli@sfu.ca or Ask a librarian.

What is a primary source?

A primary source is a document or other sort of evidence written or created during the time under study, or by one of the persons or organizations directly involved in the event. Primary sources offer an inside view of a particular event.

Primary Sources for the Humanities guide provides an extensive list of sources which may also be useful for students of Gender, Sexuality and Women's Studies (GSWS).  This guide provides a selected number of these sources.  Selected sources are included in this guide.

Use the Basic Catalogue Search or Advanced Search to find books that are "primary sources."

Reading and interpreting an historical document requires a thoughtful and critical approach. The following sites offer some guidelines for approach and evaluation: Reading a Primary Source , Dohistory, and Using Primary Resources. 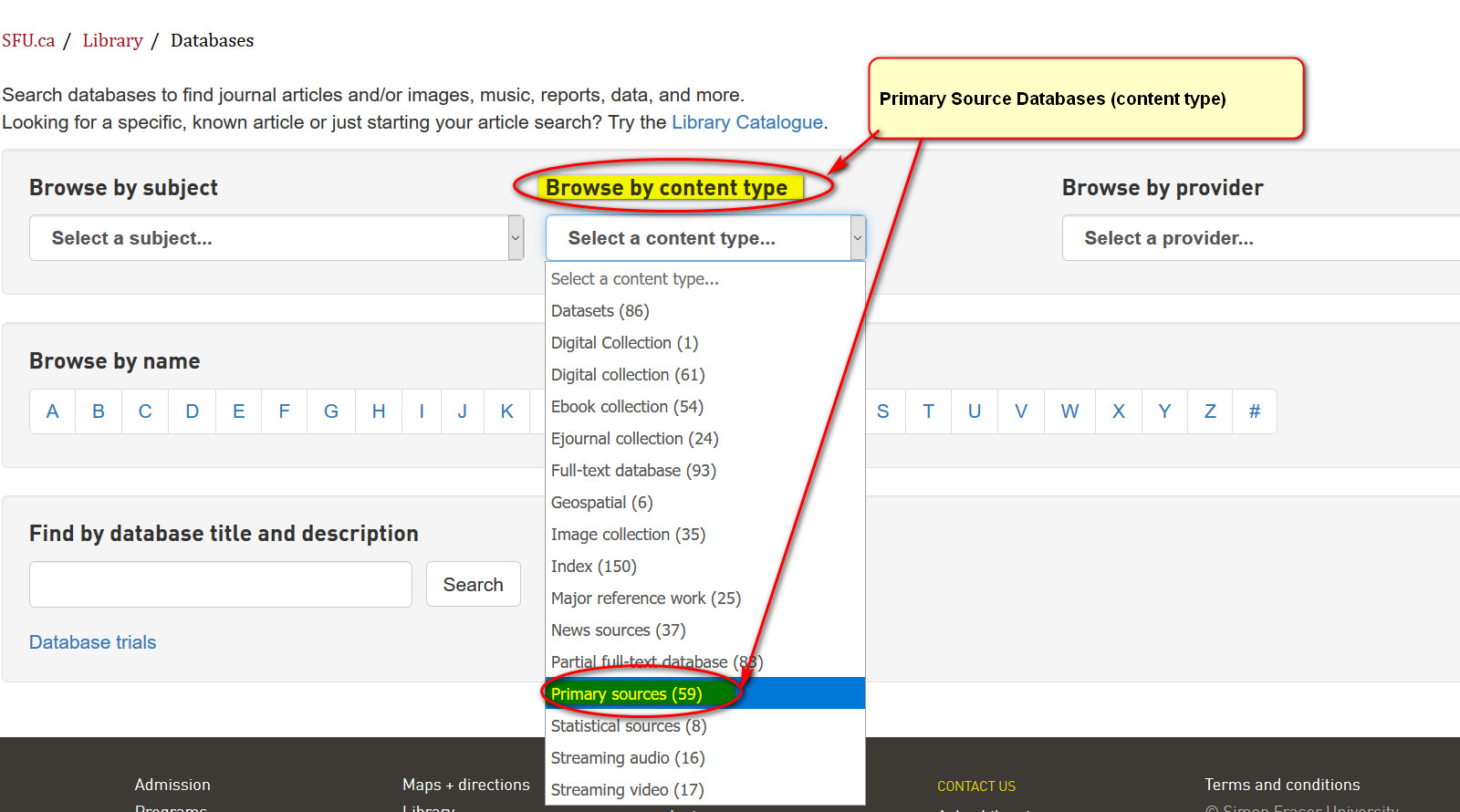 Archives of Lesbian Oral Testimony (ALOT)
"the oral histories of people who presently or at one time identified as lesbian."

Archives of Sexuality & Gender
A collection of primary sources on social, political, health, and legal issues impacting LGBTQ communities around the world since 1940.  Rare and unique content from newsletters, organisational papers, government documents, manuscripts, pamphlets, and other types of primary sources sheds light on the gay rights movement, activism, the HIV/AIDS crisis, and more.

Use "Advanced" search for more flexibility in searching.  Use "topic finder" to search or topics.  E.g. film or cinema or "motion picture*"

ARTstor
Currently contains over one million images. The Collection documents artistic traditions across many times and cultures and embraces architecture, painting, sculpture, photography, decorative arts, and design as well as many other forms of visual culture.

British and Irish Women's Letters and Diaries
The immediate experiences of British and Irish women, as revealed in diaries and letters. Use the "Browse" icon to search for "personal events" such as courtship, pregnancy, childbirth, and spouse's absence.

Discovering American Women's History Online
Primary documents. Over 400 digital collections about the history of women in the United States.

Empire Online
A collection of over 70,000 images of original manuscripts and printed material, 1492-1969, taken from libraries and archives around the world, including Africa, the Americas, Australasia, Oceania, and South Asia.

Independent Voices: an Open Access Collection of an Alternative Press

Italian Canadian Women Oral History Collection
Interviews collected in the 1970s and 1980s documenting the experiences of Italian women who immigrated to Canada throughout the first three quarters of the twentieth century.

Italian Canadian Women Photograph Collection
A collection of archival images dating from 1950 to 1975 celebrating the contributions of Italian women immigrants to Canadian history and culture.

Liberty Magazine
Published from 1924 to 1950, Liberty Magazine was an American weekly which often focused on sensational and popular issues. Gain insight into life in the United States during the Depression era and World War II. The articles, stories and advertisements in Liberty Magazine offer a perspective on the everyday lives of working-class and middle-class America when illustrated magazines were a popular form of mass entertainment.

Mass Observation Online: British Social History, 1937-1972
The papers of the Mass Observations organisation. It offers an unparalled insight into everyday British life in the 1930s and 1940s

Oral History Online
More than 2,500 collections of Oral History in English from around the world.

Perdita Manuscripts: Women Writers, 1500-1700
Collection of manuscripts written or compiled by women in the British Isles during the 16th and 17th centuries.

Popular Culture in Britain and America, 1950-1975  Colour images of manuscripts and rare printed materials, as well as photographs, ephemera and memorabilia covering popular culture in Britain, America, and Canada from 1950 to 1975.

Video interviews chronicling the experiences of older lesbian-gay-bisexual-transfolk conducted as part of a project called "Stories of Older Queers: Videography and Archives of Queer Elder Experiences."

Scottish Women Poets of the Romantic Period
An electronic collection of over sixty volumes of lyric poetry by Scottish women, written between 1789 and 1832

Correspondence, newspaper clippings and other materials related to Shirley Petten's landmark ruling on same-sex survivor benefit rights from the BC Worker's Compensation Board in 1992.

Women, War and Society, 1914-1918
Documents and interpretive essays on women's involvement in World War I, primarily in Britain.

Primary sources from other countries

Many archival and library collections are now preserving, digitizing, and providing access to significant primary historical resources. The Internet also provides access to many other primary sources, such as advertisements, e-mail messages, speeches, manifestos, creative works, laws and court cases, historical documents, etc. It is always possible to search for specific items by using a web browser.

For a more complete list, see Primary Sources for the Humanities: Canada