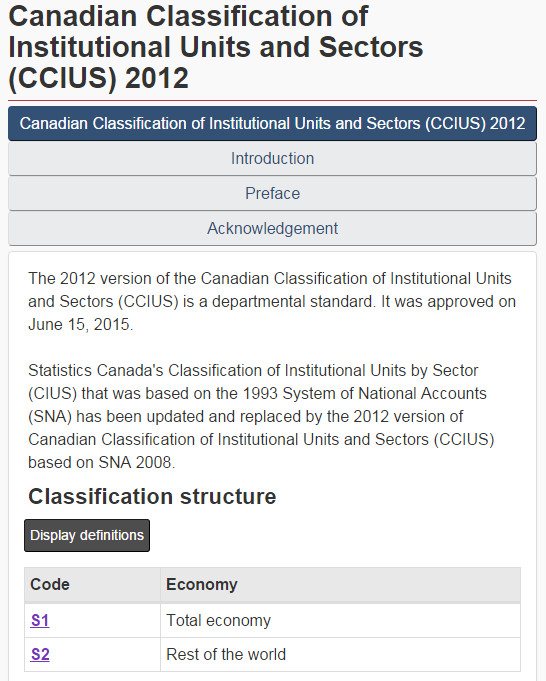 We can't study, discuss, or understand anything until we agree on what to call it and how to define it.

I realize that may seem a trite truism, but the foundations of many of the most complex concepts are often formed of such simple principles.

In this case, the semantics are covered by Statistics Canada's new Canadian Classification of Institutional Units and Sectors (CCIUS) 2012 --  The CCIUS "provides consistent and coherent definition for concepts underlying the production of economic statistics used for compiling macroeconomic aggregates published by all the programs in [Statistics Canada's] Macroeconomic Accounts Branch."

That is, the CCIUS serves as the (new) common language for framing much of the collection and reporting of Statistics Canada's economic data on industrial organization, government finance, and more. Moreoever, it is more closely aligned with international classification, a significant step toward the common language needed for comparison with data on other countries via the OECD, the IMF, etc.

See the CCIUS Introduction for a more detailed discussion of the CCIUS, including the ways in which it differs from its predecessors, or click here to see a full list of the 171 categories in its structure, each of which includes a very specific definition... because without such categories and definitions we are doomed to inconclusive and incoherent discussions. Semantics matter!

Previous post: On Gary the Guppy and Google... Next post: A companion for your journey into a new research area...