Welcome back! Student Learning Commons services are here for you -- both in-person and online.

Alt-text: Stands for alternative text. Alt-text can be inserted into presentations, word documents, websites, etc. The purpose of including alt-text is to provide a description, in words, of any images in your work. Alt-text ensures that screen readers can support users to engage with images.

Intersectionality: A term coined by Kimberlé Crenshaw. Crenshaw’s work on critical race theory and intersectionality provides a framework for understanding that the facets of our identities are not “detachable” from one another, and that inequalities can compound. Individuals who embody multiple marginalized identities (for example, Black trans women, disabled queer people, women of colour) are exposed to multiple forms of systemic oppression, and these experiences of oppression compound one another.

Other/Othering: Used to refer to the ways that we can view, treat, and write about people (or experiences) as fundamentally different from and alien to ourselves..

Breastfeeding/chestfeeding: Many people do not identify with the terms breast or breastfeeding, as these have a long history of being gendered female. Some people will therefore refer to the activity of feeding an infant from their bodies as chestfeeding.

Folks/folx: Both of these terms are gender neutral ways to refer to groups of people. The term folx provides a way of signaling that you are specifically and explicitly including trans and non-binary people.

Genderqueer: Sometimes used interchangeably with the term non-binary (see description below). This term combines the words gender and queer and is often used by people who are actively engaged in queering gender. Queering gender involves challenging the gender binary through gender expression and identity.

Heteronormative: Used to refer to the social assumption that it is normal to be heterosexual and cisgender. Some examples of heteronormativity include gender segregated washrooms and the frequent depiction of families as “normally”[1] including a (cisgender) mother and father who have a direct biological relationship with their children.

2SLGTBQIA: 2 Spirit, Lesbian, Gay, Trans, Bisexual, Queer, Intersex, Asexual & Aromantic.[2] There are many variations of this acronym. For more information on the term 2 Spirit (or Two-Spirit) and how to use it respectfully and accurately, see Harlan Pruden’s Two-Spirit Conversations and Work.

Non-binary: Used to challenge the idea that there are only two genders (i.e., male and female). Non-binary folks (or folxs, see glossary entry above) use this term to signal that their gender-identity and/or gender-expression does not align with a binary understanding of gender, regardless of the biological sex they were assigned at birth.

The expression “coming out” seems to imply an event that happens only once. However, we all actually choose what information to provide about ourselves in many different circumstances, and over the course of our lives. Furthermore, many have challenged the notion that queer people, and only queer people, should disclose information about their sexual or romantic identities. This idea rests on heteronormative assumptions.

Pronouns: Pronouns are words that can take the place of a noun in a sentence. The English language has binary gendered third person singular pronouns (she/her/hers and he/him/his): there are only two options and they are both assigned a gender. Some other languages have more options, or options that are not gendered. Because gender is not, in fact, binary, these English language pronoun options are too limited. The third person plural pronoun “they/them” can be used as a gender neutral alternative to gendered pronouns. Using they/them as a gender neutral third person pronoun is grammatically correct, even when the pronoun is taking the place of a singular noun. Here is an example: “Rico is so smart. I hope they are in my group for the project!”

Straight: Straight is used to refer to people who self-identify as heterosexual.

Trans and Transgender: Used to refer to people who do not identify their gender exclusively with the biological sex they were assigned at birth. The term trans is often associated with transitioning from one recognized gender identity to another. For example, a person may self-identify as trans or transgender if they were assigned male at birth and have since transitioned to a female gender-identity and expression. Some related terms include AFAB (Assigned Female at Birth) and AMAB (Assigned Male at Birth). Note that a gender transition can involve many stages and may or may not include things like hormone therapy and surgery.

Culture of white supremacy: Used to refer to a culture in which white people are systematically privileged at the direct expense of all peoples who are not white or white presenting.

Indigenous: The term Indigenous is a collective noun used to refer to the Peoples and Nations that existed on Turtle Island prior to colonization, and continue to exist here now. Many people prefer the term Indigenous to other terms like Indian, Aboriginal, First Nations, or Native; however, the terms Aboriginal, First Nations, Inuit, and Métis are all currently used in Canadian law. More information about how to use these terms respectfully in your writing can be found in the Black, Indigenous, People(s) of Colour (BIPOC) guide and in Dr. Gregory Younging’s Book Elements of Indigenous Style (2018).

People(s) of Colour: Used to refer to all people who are not white.[4] This term is often used to signal shared experiences of systemic oppression and racism in a culture of white supremacy. The term is pluralized (i.e., People(s) of Colour) to highlight the many people and experiences that are encompassed by it. While the term is controversial, especially when it is used in ways that erase the specific experiences of Black people and anti-Black racism, it is often preferred to terms like non-white, which continue to explicitly centre and normalize whiteness as a dominant experience.

Racist: "One who is supporting a racist policy through their actions or inaction or expressing a racist idea" (Kendi, 2019, p. 13). In How to be Antiracist, Ibram X. Kendi clearly explains that there is no such thing as "not racist," only racist and antiracist. Academic institutions have long colonial and racist histories. We are therefore challenged to actively take up antiracist writing practices that change received conventions.

Turtle Island: Used to refer to the lands that are now collectively known as North America without referencing the colonial names that have been given to these places (for example, Canada, the United States of America, North America). The term Turtle Island is a reference to an Anishinaabe creation story.

Unceded: To concede something means to give it up. For example, in an argument I might say “I conceded that point,” as a way of saying that I see the other person’s perspective and have been convinced to give up my argument. Unceded means never given up, transferred or surrendered. The term unceded is often used in land or territorial acknowledgments to refer to lands or territories that were never given up and for which there are no treaties. Note: where there are treaties, lands and territories would not be considered unceded, though there are many contemporary legal challenges about the appropriateness of the treaties, the ways that they have been interpreted and applied, and the processes that were used to make them. The presence of specific treaties does not close the conversation on Indigenous land rights or sovereignty. However, the term unceded makes it clear that the ongoing occupation is illegal under international laws, such as the UN Declaration on the Rights of Indigenous Peoples. Indigenous/non-Indigenous relationships on unceded territories require unique forms of reconciliation and restitution.

White: Used to refer to people with white skin. The context of white supremacy (as defined above) means that the term white is also often associated with significant socio-cultural privilege.

White presenting: Used to refer to people who have a cultural and/or racial identity that is not white, but who experience what has been called “white skin privilege” because of how they look.

The definitions for terms in this section were substantially informed by the following sources:

Both sources are referenced with permission.

Neurodiversity: coined by Judy Singer in 1998, this term combines neurological and diversity and refers to “natural variation of human brains and minds” (“All Brains”). Neurodiversity recognizes that human neurology is both complex and diverse, and the term can be used to challenge the ableist view that there is one “normal,” “right,” or “healthy” form of human cognition.

Neurodivergence/neurodivergent/neuroatypical: used to describe a person or people who diverge from the social standards for typical neurocognition. As Walker states, “groups are diverse; individuals diverge” (n.p.). The terms neurodivergent and neurodivergence were coined by Kassiane Asasumasu (Walker).

Neurotypical: the opposite of neurodivergent. This term is used to refer to people whose neurocognitive function meets the dominant social standards (Walker). The study of neurology has tended to focus on functions that have been deemed typical. Researchers and writers have therefore created the categories of typical and atypical. These categories are neither neutral nor inherent.

Writers use the term neurotypical to refer to people whose experiences tend to fall in line with the typical or normative study of neurology. This approach avoids reproducing the social standards of normal and abnormal cognition. Inclusive writing recognizes that there are many kinds of neurological experiences, and so neurodiversity is actually the norm of human cognition.

The following Venn Diagram, reproduced from the “All Brains Are Beautiful” workshop (with permission[5]), visualizes the relationship between neurotypical and neurodivergent experiences. Note the overlapping spaces in the diagram: many people are allistic (non-autistic) and neurodivergent. 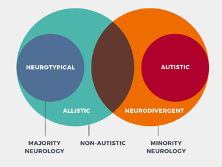 The image shows two large overlapping circles labelled Neurodivergent (minority neurology) and Allistic (non-autistic). Within each large circle is a smaller circle. The small circle on the Neurodivergent side is labelled Autistic. The small circle on the Allistic side is labelled Neurotypical (majority neurology). The diagram shows that there is significant overlap between the two large circles, indicating that the distinctions between neurotypical and neurodivergent are not as clear or simple as is often assumed.

Stimming: Stimming is short for self-stimulation, which often includes repetitive body movements, actions, or spoken words/phrases. Everyone stims! Common examples include whistling, biting nails, tapping a pen or feet, twirling hair, rocking, and pacing. Autistic stimming differs based on frequency and social acceptability. While often misunderstood by allistic/neurotypical people, stimming helps with management of both internal and external sensations and emotions (“All Brains”). Stimming is also a way of communicating; the All Brains Are Beautiful workshop describes stimming as “Autistic body language.”

You can download the complete Inclusive and Antiracist Writing Guide, with expanded explanations, on the Overview Page.

[2] For definitions of these and other terms, see the LGBTQIA Resource Centre Glossary here: https://lgbtqia.ucdavis.edu/educated/glossary

[4] Terminology related to race and skin colour has a long and challenging history, which you can research if you are interested. This Oxford Bibliography entry on Language and Race provides a starting point: https://www.oxfordbibliographies.com/view/document/obo-9780199766567/obo-9780199766567-0183.xml

[5] Thank you to Vivian Ly for allowing use of this diagram. It was inspired by another diagram to visualize neurodivergence, created by Martin Silvertant.