An active and respected member of the B.C. Mountaineering Club (BCMC) from 1946 until his death in 1999, Richard (Dick) Chambers made approximately twenty first ascents of mountains and new routes in the Coast Mountains of British Columbia between 1951 and 1967.

The 822 photographs recently digitized from the Richard Harwood (Dick) Chambers Alpine Photograph Collection provide a unique and visually stunning record of these activities, bringing to life the mountaineering culture in British Columbia from the late 1940s to the 1960s and comprising the first photographic documentation of a number of peaks in the Coast Mountain region.

Early explorer of the Coast Mountains of British Columbia

Chambers was born in Regina, Saskatchewan, but raised in Vancouver. He is most renowned for first ascents of:

Other significant accomplishments include:

The collection contains colour photographs of each of these expeditions, providing the first known visual record of many of these locations from the ground. It was donated to the SFU Library in 2012 by Chambers’ niece and nephew, Barb and Jim Diggins. 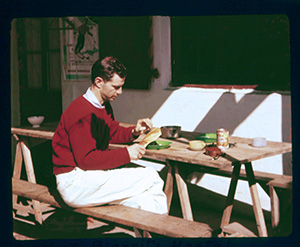 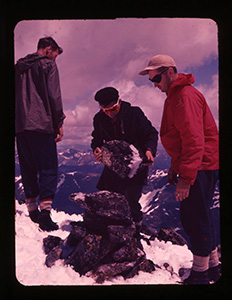 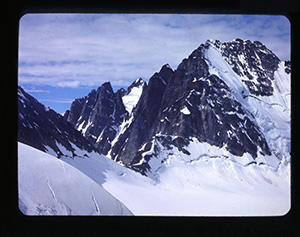 Described as the “heart and soul of the [BCMC] Climbing Committee in the 1960s,” Chambers served as the club’s president from 1961 to 1963 and received an honourary club membership in 1968. The photographs and accompanying notebook document Chambers’ and the BCMC’s pioneering mountaineering activities and exploration during the period 1947 to 1968. Unlike the Rocky Mountains of Canada, the Coast Mountains were late in being explored by mountaineers. During the period recorded in these photographs, much of the region remained little visited, and the exploration lasted into the 1980s. As a result, the photographic record of mountain exploration in the Coast Mountain region is relatively poor and fragmentary, especially for the period from the late 1930s through the 1950s. The Chambers collection fills several gaps in this record.

Chambers was meticulous in recording the details of each image he captured with his Zeiss Ikon camera – every slide is identified with the location, names of individuals, and the date. An accompanying notebook, also digitized, lists the photographs taken on each roll of film and includes additional technical information. Further documentation of many of these trips is available in BCMC newsletters and issues of the Canadian Alpine Journal. 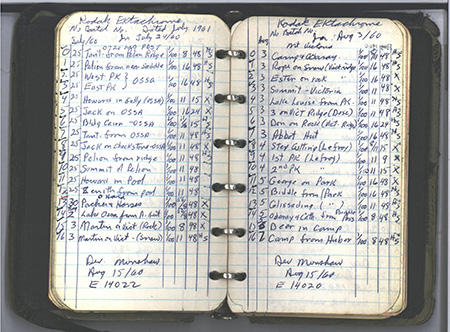 As an entirety, these photographs document some of the major expeditions of the BCMC between 1947 and 1968, and record the topography, flora and fauna of significant mountains in the Coast Mountain region. The photographs show the clothing, equipment and climbing methods of the day. Of particular interest are images of mountain and crevasse rescue techniques that were used by the nascent Mountain Rescue Group, the predecessor to the North Shore Search and Rescue. By profession a radio engineer with Spilsbury and Tindall Communications, Chambers was a founding member of the group, and was engaged both in searches and as the organization’s communications specialist. As a result, the collection includes rare images of rescue training exercises at Mt. Seymour and Mt. Baker in the 1950s. Also interesting and unusual is a small series of photographs showing details of the construction of several of the alpine huts built by the BCMC, such as the Himmelsbach Hut at Russet Lake, a design that was influential in the construction of other huts in the province.

Many of the photographs will also have value to researchers in the areas of geography, earth sciences and environmental studies. For example, recent work in Jasper National Park has demonstrated the value of historical land-based photographs in studying changes in vegetation over time. Similiary, repeat ground-based photographs of glaciers can lead to better estimates of changes in glaciers over time, as they give perspectives and details that satellite images and air photographs cannot capture. In such work, it is important to know the details of the camera used and other technical details of the historical photographs. The visual detail and quality of the images captured by Chambers, combined with the level of specificity to which the subject matter has been recorded, gives them particular potential value for such studies. 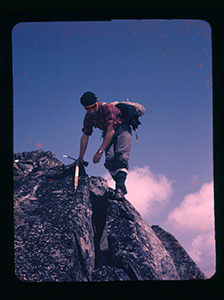 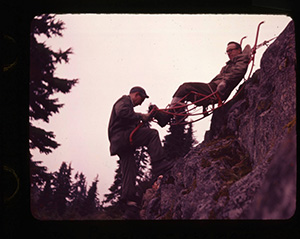 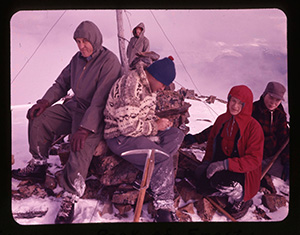 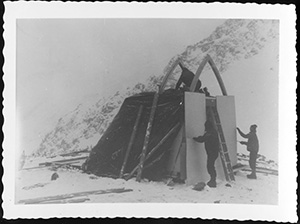 With financial support provided by the Irving K. Barber Learning Centre's "BC History Digitization Program" to make this collection available online, it is now possible to experience this rich, insider’s view of what some consider the last great period of exploratory mountaineering in western British Columbia from the comfort of your own living room.